Q: Should I have my baby son circumcised? 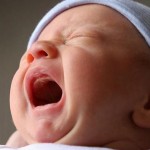 Question: I am six months pregnant with my second son. We didn’t have our first son circumcised, but recently we heard that “the benefits outweigh the risks”. We are very confused and don’t know what to do, as everyone is telling us something different.

Answer: Congratulations on keeping your first son intact. The foreskin is an amazing and complex part of the penis, serving many important health and sexual functions. Various claims that circumcision has medical benefits (including reducing HIV) have been made over the last 150 years, all to be disproved later. As a result circumcision has been described as “an operation looking for a reason.” Many doctors are against it and you can read about that at Doctors Opposing Circumcision. Even if circumcision were to be conclusively proven to have any significant health benefits (which is unlikely) the pain and shock experienced by the baby, and possible sexual problems later in life, are not factored into the equation, leading to a false conclusion. (You can learn more about that at NOCIRC as well as watching a very informative video). When all the factors are taken into consideration, keeping your baby intact is by far the wiser choice to make.

The foreskin is the most sensitive and highly innervated part of the penis, and babies who experience pain much more more acutely than adults definitely experience being cut as painful. Circumcision also dulls the adult man’s sexual pleasure (and often that of his partner). Fortunately since most circumcised men have never known what it feels like to have a foreskin, they consider what they experience during sex to be normal and as a result many men don’t have any strong feelings about it. A significant number do experience sexual problems at times though and a number of these land up in psychotherapy because of the impact these problems are having on their relationships. 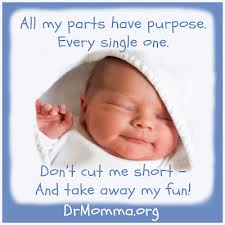 Recent studies have found that the foreskin is not just a little flap of skin, but in fact the most highly innervated part of the entire penis, with the most sensitive part of all being the “ridged band” just under the very tip. This is packed full of Meisner’s corpuscles, which are very sensitive to fine touch. The glans, which is designed to be an internal organ is sensitive mainly to pressure and pain. When an intact man makes love with his partner, the foreskin rolls backwards and forwards over the glans. As he moves, an intact man actually “glides” in and out, making the pleasure sensation continuous for him and his partner. A circumcised man in contrast, has to thrust or “pump” to get enough stimulation to reach orgasm. This is far less pleasurable for both of them as stimulation comes in bursts and because it causes friction, older couples may abandon sex earlier as it becomes painful rather than pleasurable.

Also because an intact man doesn’t have to pull away and then thrust forwards, it is more likely that his pubic area and that of his partner will remain in contact, so that he is constantly stimulating her clitoris. For that and other reasons, the partners of intact men are more likely to experience vaginal orgasm than partners of circumcised men. Interestingly, the foreskin is actually far more sensitive than even the female clitoris, having many more specialised nerve endings. Because an intact man doesn’t need to pull out so far to thrust back in, the lubrication in his partner’s vagina stays in place, as does his own. That makes for smoother and more sensuous stimulation for both of them, and artificial lubricants aren’t needed, making the sexual experience far more satisfying for both partners than if the man had been cut. When the foreskin is removed, a man loses about four fifths of his penile sensitivity, the most sensitive part remaining being the scar where he was cut, which is sometimes oversensitive, resulting in a feeling that combines elements of both pleasure and pain.

Above is an excellent video on the foreskin (prepuce) why it is there, what it does, all the highly specialised nerve cells it has, and why it is important to keep it intact for a really good love-life.

For people who have had their baby boys circumcised and may later regret it, it may be helpful to remember that you did what you believed to be best for your baby at the time. If your child is upset about it you can reassure him that he can “regrow” his foreskin using a small device that he would need to wear for a few years. This device uses weights and/or gentle tugging to stretch the tiny bit of foreskin that is left and new cells and mucus membranes grow over time. Men who have successfully regrown their foreskin to the point where it once again covers the glans, say they are amazed at how much sensitivity they have regained. Their partners are usually very happy too, because they are now able to “glide” (as nature intended) instead of having to “thrust” during lovemaking, making the experience more pleasurable for both of them, and making it more likely that the woman will achieve orgasm. Recent research with stem cells suggests that regrowing the foreskin is going to be quicker and easier in the future too.

HIS BODY, HIS CHOICE. The greatest gift you can give your son is to keep his body intact, because it belongs to him. Later he will probably thank you for allowing him to make the circumcision choice when he is old enough to weigh up the facts and make an informed decision for himself.

If you are still in need of help or support, here is a list of organizations around the world who offer advice and counselling
Helpful Sites Around the World.

This entry was posted in FAQ and tagged circumcision, help, intact. Bookmark the permalink.

11 responses to “Q: Should I have my baby son circumcised?”