Kangaroo Mother Care — the Magic of a Mother’s Touch

Kangaroo Mother Care (KMC) is for every mother; every baby. The mother’s skin is the baby’s natural environment, and both physically and emotionally the healthiest place for the baby to be, says KMC researcher, Dr Nils Bergman, of Cape Town.

When Krisanne Collard’s ‘tiny miracle’ was born at 24 weeks, she weighed only 795 grams. To save her life, baby Kaia was rushed into intensive care in another hospital 40 kms away and put onto a ventilator because she needed oxygen. Krisanne was devastated – she had just given birth, but her arms were empty. Even when she was able to visit her baby and touch her gently, Krisanne felt terribly helpless. Kaia’s heart kept stopping whenever she was touched, and she wasn’t expected to live.

So when the staff gave Krisanne a reclining chair and suggested she take off her shirt and bra so they could put Kaia onto her warm skin, she was absolutely terrified. “Kaia was so tiny and fragile,” she says, “I thought I would kill her if I touched her – maybe her heart would stop beating again. But the staff were very encouraging so I was finally willing to give it a try. To my amazement, Kaia wriggled a few times, snuggled in and fell into a deep, healing sleep. Her blood-oxygen saturation increased so well that we had to turn down her ventilator by almost half! “I was on top of the world and felt like a real mother for the very first time. After that I held her skin-to-skin on my chest every day and she thrived”, she adds.

Why all newborn babies need KMC

KMC research assistant, Marianne Littlejohn, explains that the transition from the womb to the world is a big adjustment for any baby, even if they are not premature. When we go through very big changes, the first thing we search for is the safety and comfort of something familiar. “Being placed skin-to-skin on the mother’s chest stabilizes the baby better than an incubator or heated cot”, she says. “The baby is soothed and comforted by the mother’s familiar heartbeat, her smell and the sound of her voice.” The mother’s gentle touch and breathing also stimulate the baby’s breathing, and he is rewarded with the sweet-tasting colostrum from her breasts. This eases the baby though the new experience of being outside the mother’s body for the very first time. (See What is Kangaroo Mother Care.)

Newborns need to be kept warm till their temperatures stabilise, and a mother’s body is beautifully designed to do this. The temperature on her chest will rise two degrees to warm a cold baby, and fall one degree to cool a hot baby, stabilizing the baby’s temperature better than even the most modern incubator can. This phenomenon is called ‘maternal-infant thermal synchrony.’ If the mother has had an anaesthetic or is too ill to hold the baby, he can be placed skin-to-skin on his dad’s chest instead. Dad’s voice is also familiar and soothing to the baby and he can help keep the baby warm too. Fathers who have had this extra contact with their newborns are more likely to be involved in caring for the baby than fathers who missed out on early contact.

Why babies need their mothers

“The more skin-to-skin contact, the better”, says Dr Bergman. “It should ideally start at birth, but is helpful any time, and will immediately soothe and calm the baby”. If they are separated from their mothers, babies start to cry in distress, stopping only when they are too tired to go on. These distress calls are similar to the distress calls of other baby mammals who have lost their mothers, and are an attempt to bring the mother back. It is called the ‘protest-despair’ response, as the baby finally gives up if the mother doesn’t appear, and stops crying, to conserve energy for survival.

The reason that babies (premature and also full-term) become so distressed when they are separated from their mothers, is the fact they know instinctively that if she abandons them, they will die. The mother provides everything the baby needs to stay alive – safety, warmth, protection and food. In nature, a baby separated from its mother wouldn’t survive for very long, and babies are born knowing that being with their mothers is essential if they are going to survive. As a result, any separation from the mother creates high stress levels in the newborn, which is something we want to avoid as that can have long-term adverse effects on the baby’s physical and emotional health. So we refer to the mother and baby as a ‘dyad’ – a pair who should not be separated, but kept together from birth on.

The miracle of a mother’s touch 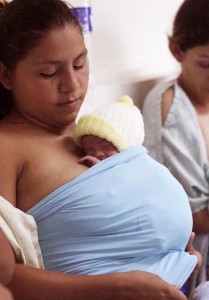 If separation has occurred, the ‘miracle of a mother’s touch’, is that reunited with their mothers, babies recover almost immediately. Their heart rate and breathing become normal, their temperatures stabilise and their stress hormones (e.g. cortisol), return to acceptable levels. “We used to think it was normal for incubator babies to have very variable heart rates, irregular breathing and fluctuations in body temperature”, says Dr Bergman. “Now we know that these are the signs of a baby who is in distress. As soon as the baby is placed in his right ‘habitat’ (skin-to-skin on the mother’s chest), these vital signs return to normal very quickly.” This means that the baby is no longer distressed, and can use all his energy for feeding, growing and thriving, rather than just trying to survive.

Sometimes premature babies are also ill and need to be on drips, be tube fed, and receive oxygen. “When they are needed we can combine these life-saving procedures, and the very latest technology, with KMC”, says Dr Bergman. “This way babies can receive the best of both worlds”. A healthy preemie can be tied to the mother’s chest in the ‘Kangaroo Wrapper’ and the mother can even walk around with her baby on an IV drip. Oxygen can also be given to babies while they lie skin-to-skin on their mother’s chest and babies can be tube-fed in the KMC position as well.

Breastfeeding is a very important part of KMC says Dr Bergman. If babies are too small to suck, they are tube-fed their own mother’s milk that she is helped to express, until the baby can suck on his own. Nature has designed things so beautifully that the milk of a mother who gives birth prematurely is quite different from the milk of a mother who has given birth to a full-term baby. The former contains special nutrients, which help the very tiny baby to grow and thrive. Also vitally important are the antibodies present in the mother’s milk, which protect the baby from disease.

The colostrum, or clear fluid, that is in the mother’s breasts for the first few days is especially important for a number of reasons. It is vital that this should also be expressed and given to a baby who is too small to suck yet. This ‘liquid gold’ is highly nutritious and easily digestible. It is the best possible food for any newborn baby, and prepares the baby’s stomach to receive the mother’s milk, which will come in on the third day after birth. Even if mothers have chosen not to breastfeed, it is recommended that they express colostrum and breast-milk for their babies if they are born prematurely or are ill in any way.

KMC for ‘every’ baby

KMC is not just for premature babies either. The transition from womb to world is a big upheaval for any baby. How we receive them and treat them for the first few days of life, will set the pattern for how they will come to perceive the world. We need to reassure them that they have arrived in a good place where they will be loved, cared for, fed and nurtured. All healthy newborns should be kept in constant skin-to-skin contact with their mothers. This enhances bonding, gives them the very best start to life, both physically and emotionally and enables optimal brain development as well.

“Someone once told me that the parents are the only ones who benefit from Kangaroo Mother Care”, says Krisanne. “I don’t agree. I saw the dramatic changes in my little miracle when I held her to my heart. For the parents, Kangarooing satisfies the need to feel like a Mom or Dad and gives us a chance to do something for our babies. For the premature babies, Kangaroo Mother Care lowers oxygen requirements, stabilizes heart rates, gives them an overall sense of peace and so much more!” If babies could tell us what they most need, they would simply say, “Hold me, feed me and love me”. Mothers have always known this – now the studies tell us they were right!

What research has shown

An important study was carried out at the Mowbray Maternity Hospital in Cape Town on healthy premature babies weighing between 1,200 kgs and 2,199 kgs. The babies were randomly assigned to two groups and all the babies in both groups were placed skin-to-skin on their mother’s chests for the first half hour of life. After that, the babies in one group were placed in an incubator for 6 hours, before being returned to their mothers. In the other group, the babies were not separated from their mothers at all, and remained in skin-to-skin contact with them from birth on. When the results were analysed, it was found that the babies who were never separated from their mothers did significantly better than the babies who were put into incubators for 6 hours. This shows that the very best care that we can give to healthy newborns (even very tiny ones) is to keep them in skin contact with their mothers as much as possible, from birth on.